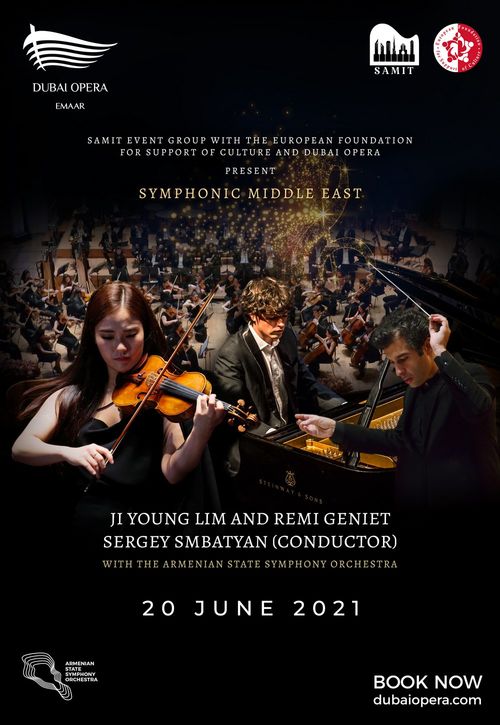 SAMIT Event Group in partnership with the European Foundation for Support of Culture and Dubai Opera present the 1st in the history of classical music, “Symphonic Middle East” festival which is aimed at identifying new cultural hubs and introducing the culture of classical music to every corner of the world. All the concerts will celebrate the talent of the 1st prize winners of the prestigious Queen Elisabeth Competition.

On the 20th of June patrons of Dubai Opera will enjoy the talent of the exceptional violinist Ji Young Lim, who is the winner of many international competitions and has been chosen as the recipient for Stradivari “Sasserno” which was made in 1717 after Huggins. Second part of the concert will feature the most prominent pianist of his generation Remi Geniet, laureate of numerous international competitions and the youngest prize-winner of the Bonn International Beethoven Competition.

The concert will be performed by Armenian State Symphony Orchestra under the direction of  renowned conductor Sergey Smbatyan.

In September 2019 he became Principal Conductor of the Malta Philharmonic Orchestra following highly successful tours of Germany, Austria and the United States, including performances at the Berlin Philharmonie, Vienna’s Musikverein and Carnegie Hall.

The musicians will treat the audience with the masterpieces of Felix Mendelssohn and contemporary composer Alexey Shor.

Seascapes for Violin and Orchestra

Acclaimed as a cultural leader in his native Armenia and increasingly in demand on the international stage, Sergey Smbatyan is founder, Artistic Director and Principal Conductor of the Armenian State Symphony Orchestra. In September 2019 he became Principal Conductor of the Malta Philharmonic Orchestra following highly successful tours of Germany, Austria and the United States, including performances at the Berlin Philharmonie, Vienna’s Musikverein and Carnegie Hall.

Music’s power to unite, heal and inspire has driven and sustained Smbatyan since childhood. His mature artistic vision combines lessons learned from the best traditions of Russian music-making and a profound personal commitment to transforming lives through the shared experience of performing and listening. The charismatic conductor’s reputation with fellow musicians and critics alike flows from his technical command, the intensity with which he shapes and communicates musical ideas, the intelligence of his programming, and the spiritual richness and depth of his interpretations.

Sergey Smbatyan was eighteen when he founded the Armenian State Symphony Orchestra in 2006. He has overseen its transformation since from youth ensemble into one of Armenia’s finest professional orchestras. They began 2020 with a landmark European tour, complete with debut appearances at Vienna’s Musikverein, the Berlin Philharmonie, Salzburg’s Großes Festspielhaus, the Barbican Hall in London, Moscow’s Zaryadye Concert Hall, the Gasteig Munich, Stuttgart’s Beethoven Hall and Prague’s Rudolfinum.

Known for his imaginative programming, Smbatyan is a determined champion of new music and supporter of emerging talent. He is founder and artistic director of four music festivals in Armenia, Artistic Director of the Aram Khachaturian International Competition and, in October 2019, conducted the WTIC World Orchestra in the first ever concert of music composed by artificial intelligence (AI). His repertoire embraces everything from masterworks of the western symphonic literature to compelling scores by Armenian and other Eastern European composers, many of them commissioned by or specially written for him.

Born in Yerevan in 1987, Sergey Smbatyan showed exceptional musical promise as a child. He received his first violin lessons from his grandmother, Tatiana Hayrapetyan, and continued his training at the Komitas State Conservatory of Yerevan, the Moscow Tchaikovsky Conservatory and with Zakhar Bron. He refined his conducting skills while studying for a PhD in fine arts at the Institute of Arts of the Armenian National Academy of Sciences and as a postgraduate student at London’s Royal Academy of Music, where he gained invaluable insights into the conductor’s art from Sir Colin Davis.

Sergey Smbatyan’s list of awards and prizes includes the title of Honoured Artist of the Republic of Armenia, presented by the President of the Republic of Armenia in recognition for his promotion of Armenian music and culture. In 2014 he became the youngest ever worker in the field of the arts and the first Armenian to be appointed Chevalier of the Order of Arts and Letters by the French Ministry of Culture.

Recent highlights include concerts with the Orchestre Philharmonique Royal de Liège and Orchestre de chambre Nouvelle Europe as well as recitals at the Salle Gaveau and Radio France, and invitations to perform with the Camerata Salzburg and at the Rencontres Musicales d’Evian with Emmanuel Tjeknovarian.

Violinist Ji Young Lim has quickly risen to international acclaim as the winner of the Queen Elisabeth Competition in 2015. In the previous year, she won the bronze medal in the International Violin Competition of Indianapolis as well as the Mozart Sonata Special Prize (2014).

In the 2020-2021 season, Ji Young performed the complete Bach and Ysaÿe Solo Violin Sonatas over two days amidst the pandemic. In 2021, she will perform Bruch’s Scottish Fantasy with Seoul Philharmonic and engage in a Korea national tour with Kronberg Friends Quartet, continuously challenging and expanding her musical horizons.

Ji Young Lim has performed on the stage of a concert hosted by the King of Belgium during his visit to Korea in March, and she played as an artist representing the Republic of Korea at the first anniversary of the Panmunjeom Declaration in April.

As a Korean native, Ji Young studied at Korea National Institute for the Gifted in Arts and received a bachelor’s degree at the Korea National University of Art under the tutelage of Nam-Yun Kim. She earned her master’s degree at the Kronberg Academy in Germany and is currently continuing her studies at Hochschule für Musik und Tanz Köln is as a doctorate student. With the support of the Nippon Music Foundation, she currently plays on a Stradivarius 1717 Violin “Sasserno.

“an impressive arsenal of strengths – a range of colors that extended from a brilliant shimmer on top to an almost viola-like richness and graininess on the bottom, the ability to race from one end of the finger-board to the other with agility and precision, a dramatic flair and an inclination…”

Emerging from a group of lovers and devotees to classical music, the Armenian State Symphony Orchestra was created in 2005 by Sergey Smbatyan, the present Artistic Director and Principal Conductor of the orchestra. From the very onset of its existence, the orchestra has been home to bright and energetic musicians, assembled around the shared vision of amplifying the cultural awareness in Armenia and elevating the spiritual excellence of human nature by the power of classical music.

The orchestra performs over 50 concerts annually, with a rich and multifarious repertoire covering multiple music genres and performance formats. Today, the 15-year-old orchestra has accrued both local and international reputation for its orchestral virtuosity and performing precision and has been spotlighted with many uplifting reviews by renowned critics and art reviewers.

The Armenian State Symphony Orchestra has been hosted by many reputable concert halls around the world, including Opera Garnier (Paris), Konzerthaus (Berlin), Dr. Anton Philipszaal (Hague), Tchaikovsky Concert Hall and the Great Hall of Conservatory (Moscow), Palais des Beaux-Arts (Brussels), Elbphilharmonie (Hamburg), Royal Theatre (Madrid), Dubai Opera House and others. It has been profiled a multitude of times with such world-class composers as Krzysztof Penderecki, Sir Karl Jenkins, Giya Kanchelli and Tigran Mansuryan as well as a number of highly distinguished performing artists. A remarkable chapter in the history of the orchestra was the 2020 European Tour with the renowned violin virtuoso and the Armenian State Symphony Orchestra artist-in-residence Maxim Vengerov with whom brilliant performances were hosted on famous stages around Europe- Berliner Philharmonie, Vienna's Musikverein, London's Barbican Center, Prague's Dvorak Hall, Salzburg's Grosses Festspielhaus, Moscow's Zaryadye Concert Hall and elsewhere.

Led by Sergey Smbatyan, the orchestra released its first CD under the title "Music is the Answer” in 2011. Recorded with the Sony records label, the CD includes works by Pyotr Tchaikovsky, Dmitri Shostakovich and Eduard Hayrapetyan.

Aside from the extensive concert activity in Armenia and overseas, the orchestra also enjoys recognition and is highly esteemed for its increasing role in educating young people in Armenia. Since 2018, in the framework of DasA educational-cultural project the Armenian State Symphony Orchestra has been sparking interest and liking for classical music in high-school students across Armenia, with an attempt to galvanize a larger movement for cultivating noble insights and taste for classical music among the young generation. True to its commitment to foster access to classical music among all parts of the society and taking ownership of its social responsibilities, the Armenian State Symphony Orchestra frequently organizes charitable events and special projects in an attempt to engage people from different communities in the cultural life that largely unfolds away from them.

A number of orchestra’s concerts have been broadcast by Medici.tv, Euronews, and Classic.fm. In 2019, a documentary was released by Mezzo TV, featuring Sergey Smbatyan and the history of the Armenian State Symphony Orchestra.

The Armenian State Symphony Orchestra is represented worldwide by Only Stage.